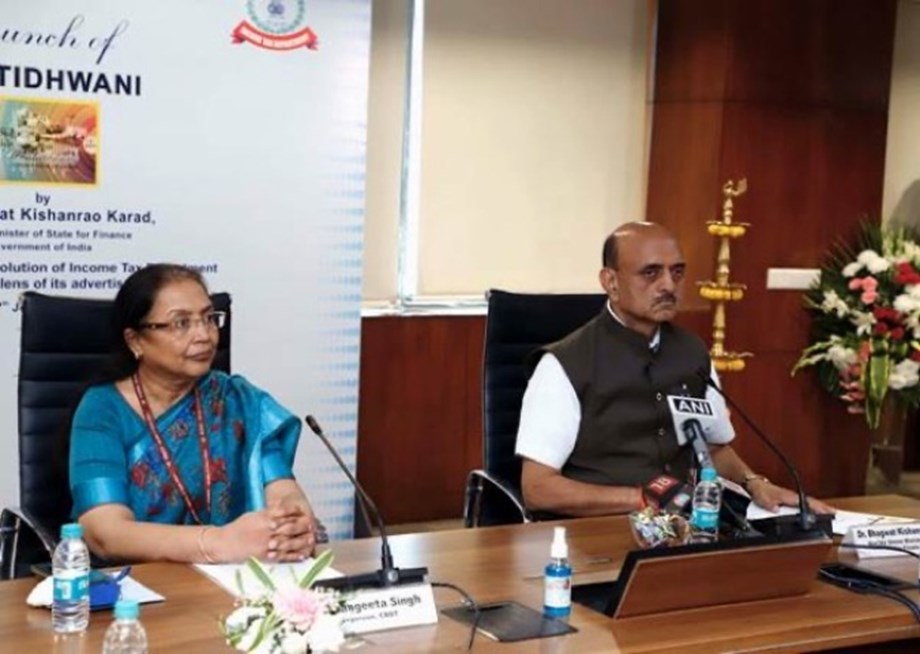 Union Minister of State (MoS) for Finance Dr Bhagwat Kishanrao Karad released an e-book titled ‘Pratidhwani’ at an event organized by the Income Tax Department here today . The event was organized as part of a series of events planned by the Income Tax Department, inspired by the Prime Minister’s call to celebrate “Azadi Ka Amrit Mahotsav” through ideas and ideals that have shaped India and by strengthening commitments to specific goals and targets. .

MoS Finance Dr Bhagwat Kishanrao Karad while publishing “Pratidhwani” commended the Income Tax Department for transforming itself into a service oriented organization while achieving high revenue collection despite challenges posed by the COVID-19 pandemic. While quoting Chanakya’s Arthashastra, he emphasized the philosophy of “Kosh, Mulo, Dandah” and reiterated that income is the backbone of the economy. He also noted that the Ministry has been able to reinvent itself by adopting positive changes to be able to provide quality and time-bound services to taxpayers, including the introduction of the Annual Information System (AIS ), instant PAN attribution (e-PAN ) and faceless rating. He commended the Department for its achievements in establishing an efficient, transparent and fair tax administration, resulting in revenue collection marked by sustainable growth and effective taxpayer services.

Congratulating the Department on the occasion, the MoS of Finance noted that “Pratidhwani” will be a remembrance for the nation celebrating the 75th anniversary of independence under the banner of Azadi ka Amrit Mahotsav and highlight the role of the Department of income tax in the growth of the Nation as evidenced by its awareness initiatives in the form of advertisements.

Smt. Sangeeta Singh, Chairperson, CBDT, in her welcome address, recalled how the Department of Income Tax has served the nation and how taxpayers have contributed to nation building. She also stated that the Department has been and will continue to engage constructively with taxpayers and communicate effectively to build trust with taxpayers.

“Pratidhwani”, which translates as “resonance”, it refers to the movement, reflection and multiplication of sounds, ideas and communication. The e-book “Pratidhwani” presents policy initiatives and changes within the Department of Income Tax and the nation’s growth through the lens of the Department’s outreach programs over the period 2000 to 2022. These Outreach programs, carried out through various print advertisements and social media platforms, reflect the ideas and practices that have helped raise revenue, thus playing a key role in the development of the nation. The evolution of the themes in the e-book reflects economic and other developments in the country during the period. The e-book collects advertisements published by the Department over the past two decades and captures the most important stories of the time, echoing the developments and policy shifts driving the growth of the Nation and the Department of income tax.

The e-book is divided into 4 chapters covering the period 2000 – 2022, each chapter describing the most important milestones reached by the Department of Income Tax during the period, highlighting the importance of awareness campaigns and the communication strategy for the overall success of the tax administration. . The e-book is available on the official website of the Department of Income Tax at https://www. incometaxindia.gov.in/Documents/Coffee-Table-Book-07-06-2022.pdf.